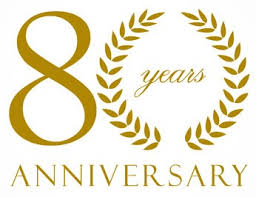 The founders, editor-in-chief and editorial staff of “Chemical Problems” journal congratulate the esteemed Academician, Agadadash Mahmud oglu Aliyev on his 80th anniversary and wish him good health and new scientific achievements in his future work.

Academician Agadadash Aliyev, an outstanding Azerbaijani scientist, a specialist in the field of chemical technology, chemical kinetics and catalysis theory recognized by the world scientific community, will be 80 years old on October 16, 2020.

A.M. Aliyev graduated from the Azerbaijan Institute of Oil and Chemistry named after A.M.Azizbekov in 1963. In 1963-1965 he worked in various industries. However, his interest in science led him to graduate school, where he began his scientific career under the guidance of academician Murtuza Nagiyev. M.F. Nagiyev was able to see in the young researcher A. Aliev a distinctive feature – the ability to analyze the essence of chemical processes, so he invited him to work at the Institute of Theoretical Problems of Chemical Technology.

Since 1967, A. M. Aliyev worked at the Institute of Theoretical Problems of Chemical Technology as chief engineer, junior researcher, senior researcher, scientific secretary, department head, laboratory manager. Since 1994, A.M. Aliyev on the nomination of Academician T.Shakhtakhtinsky who highly appreciated his organizational skills,  worked as deputy director for scientific affairs of the institute. Later on, in 2010-2014, A.M. Aliyev acted as director of the institute.

In 1969 he defended his candidate’s dissertation, in 1984 – his doctoral dissertation, received the title of professor (1986) in the specialty “Processes and apparatus of chemical technology.” In 1989 he was elected a corresponding member of NANA in the specialty “Theoretical foundations of chemical technology”, and in 2001 he became a full member (academician)  National Academy of Sciences of Azerbaijan in chemistry.

Scientific researchs by A.M. Aliyev are reflected in more than 700 scientific publications, including 63 copyright certificates and patents.

The scientific-research work carried out under the supervision of A.M Aliyev is of great interest in many countries worldwide. He honorably represents the Azerbaijani science at conferences and symposiums held in a number of countries around the world (USA, Bulgaria, Turkey, Belgium, France, Greece, etc.).

The theoretical and practical significance of his work also aroused the interest of foreign scientists. A.Aliyev collaborates with various research and design centers of the United States (University of Wisconsin, Madison, where he was on a long-term scientific trip), Russia (NIIMSK, Yaroslavl, Giprokauchuk, Moscow).

In 1997, AM Aliyev, as a representative of the National Academy of Sciences of Azerbaijan attended a third meeting of the UN Commission on Science and Technology in Geneva (Switzerland).

In addition to his scientific work, A.M. Aliyev has made a great contribution to the training of young specialists in universities – chemists and chemist-technologists, research staff. Under his scientific guidance, 38 doctors of philosophy and 5 doctors of sciences were trained.

A.M. Aliyev has for many years been a member of the Dissertation Defense Board D 004.0901; an active participant of “Theoretical Foundations of Chemical Technology” section of the Republican Council “Catalysis”.

Academician AM Aliyev is a member of the editorial board of “Azerbaijan Chemical Journal” and “Chemical Problems” journal.

A wide range of scientific interests of the scientist and his ability to work productively, his erudition, sensitivity and kindness won him the sympathy of the staff of the Institute of Catalysis and Inorganic Chemistry and the scientific community of the republic as a whole. 7 th All-Russian conference “Fuel cells and Power Plants based on them” with international participation and 4d School for young scientists “Modern aspects of high efficient fuel cells and power sources based on them” will be lead from September 27 – October 1 2020 by the Institute of Solide State Physics Russian Academy of Science. http://www.issp.ac.ru/fuelcell20

The journal of “Chemical Problems ” is the general information sponsor of the conference.

On April 15, 2020, a member of the international editorial board from Azerbaijan of the journal “Chemical Problems” a famous chemist, Correspondent member of ANAS Ali Najafgulu oglu Nuriyev died. The editor-in-chief and members of the editorial board of the journal mourn Honored Worker of Science Nuriyev with their relatives and friends and sincerely condole him. The bright memory of Ali Nuriyev will forever remain in our hearts. 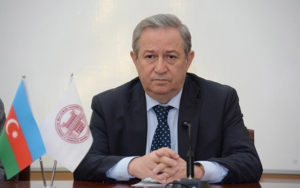 President of the Republic of Azerbaijan Ilham Aliyev awarded Academician Dilgam Tagiyev the Order of “Shohrat” for his achievements in the development of science in Azerbaijan. On this occasion, the founders, editors and members of the editorial board of the journal “Chemical Problems” congratulate him, wish him health, longevity, success in scientific work and in his personal life. 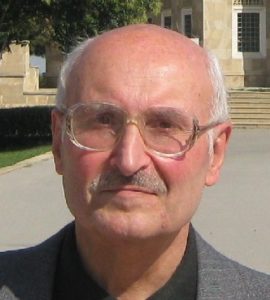 President of the Republic of Azerbaijan Ilham Aliyev awarded Academician Vagif Farzaliyev the Order of “Sharaf” for his achievements in the development of science in Azerbaijan. On this occasion, the founders, editors and members of the editorial board of the journal “Chemical Problems” in which he is editor in chief congratulate him, wish him health, longevity, success in scientific work and in his personal life.

The founders, editors and members of the editorial board of the journal Chemical Problems cordially congratulate the director of the Institute of Catalysis and Inorganic Chemistry named after Acad. M. Nagiyev of the NAS of Azerbaijan, academician Dilgam Tagiyev with his 70th birthday. They wish him good health, longevity, success in scientific work and the achievements of the institute he leads.

It is to announce with the greatest sorrow that

Doctor of Science (Technology), Lenin Prize Laureate, Honorary Chemist of the Russian Federation, Honored worker of Science and Technology, passed away on 28 October 2019 at the 94th year of life.

Andrey Tomilov was born in the town of Vyatka (currently Kirov).

After finishing school, from 1943 to 1944 he worked as a annealer at a defence plant. From 1944 to 1947 he studied in Kirov Aviation technical college, and from 1947 to 1952 in Moscow Chemical Technological Institute named after D.I.Mendeleev. He graduated from both the educational institutions with honors.

Since 1952 Andrey Tomilov’s life had been associated with State Research Institute of Organic Chemistry and Technology (GosNIIOKhT). Over 60 years of work he worthily walked the long path from senior researcher to Head of laboratory. He finished his work in 2012 in the position of Chief scientific worker.

Prof. Tomilov is well known for his comprehensive studies in the field of the theory and practice of organic electrosynthesis. Being an informal leader of a scientific direction – the electrochemistry of organic compounds – in both Russia and CIS countries he contributed a lot into the systematization of scientific achievements and definition of the course of further development of this scientific area. He developed industrial methods for the production of pinaconhydrate (1960-1970), adipodinitrile (1972), and edil herbicide (1980).

Prof. Tomilov published more than 450 scientific works and obtained more than 130 patents and inventor’s certificates. He is a co-author of 12 monographies on the electrochemistry of organic compounds among which is the first domestic monography “The Electrochemistry of Organic Compounds”, translated into several foreign languages; he is also the author of two textbooks for institutes of higher education and three teaching materials on practical electrochemistry.

Prof. Tomilov prepared more than 35 PhDs and six Doctors of Science. For many years he was a member of the Academic Board of GosNIIOKhT and several dissertational councils. Since 1980 he headed the section on the electrochemistry of organic compounds in the Scientific Council at the Presidium of the Academy of Science.

Andrey P. Tomilov was distinguished by the utmost professionalism, outstanding organizational skills, widest breadth of technical vision, efficiency and adherence to principles. Besides this, everyone knew him as most sympathetic, friendly and creative person, who was always ready to provide support and to come to everybody’s help at a moment of trouble. For all this he won the utmost respect, authority and grateful attitude.

We are mourning together with prof. Tomilov’s family and relatives, and sincerely condole with them on their loss.

The cherished memory of Andrey P.Tomilov shall forever preserve in our hearts.

We want to thank you for your participation in SED’19.We would also like to thank for your very interesting and useful oral andposter presentations. It was our pleasure to welcome you to Sofia and spend afew days together. We hope to meet again soon.

We look forward to receiving your articles beforeNovember 30 for publication in a special issue of “Bulgarian ChemicalCommunications”. Instructions about Preparation of Manuscripts you can find onhttps://adm.sed.iees.bas.bg/public_html/shr/ufo/files/Guide_for_Authors.pdfSelected articles can be published in a “ChemicalProblems” journal (www.chemprob.org) following a normal review procedure.

The founders, editors and members of the editorial board of the journal Chemical Problems congratulate the editor-in-chief of the journal Vagif Farzaliev on his 80th birthday. They wish him good health, longevity, success in scientific work and prosperity of the journal.

The head editor, founders, editorial board and members of the journal “Chemical Problems” congratulate the management and staff of the Institute of Petrochemical Processes named after Y. Mammadaliyev NAS of Azerbaijan on its 90th anniversary. They wish them health and success in further scientific work. 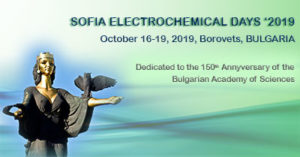 6. October 16-19, 2019, in the city of Sofia (Bulgarian), will be national conference with international participation “SOFIA ELECTROCHEMICAL DAYS ‘2019”.  http://sed.iees.bas.bg

The journal of “CHEMICAL PROBLEMS ” (www.chemprob.org) is the general information sponsor of the conference. 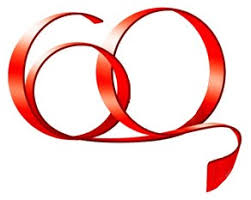 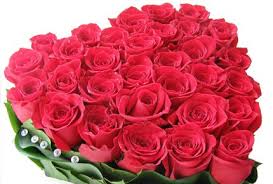 The Azerbaijan Chemical Journal is a sound and respectful edition on chemistry in Azerbaijan, which has been published since 1959. The journal publishes the articles dedicated to the actual problems of chemistry and chemical technology, investigations in the field of inorganic and physical chemistry, organic and petrochemical synthesis, kinetics and catalysis, modelling and optimization of the chemical process, as well the articles on the current problems of ecology. The editorial board and members of the journal “Chemical Problems” congratulate the editorial board of the journal “Azerbaijan Chemical Journal” on its 60th anniversary. Wish them health, success in life and further prosperity of the journal.

6th All-Russian conference “Fuel cells and Power Plants based on them” with international participation and 3d School for young scientists “Modern aspects of high efficient fuel cells and power sources based on them” will be lead from 23 th to 27 th of June by the Institute of Solide State Physics Russian Academy of Science (ISSP RAS) in city Chernogolovka, Moscow region http://www.issp.ac.ru/fuelcell2019/en/.

The journal of “Chemical Problems ” is the general information sponsor of the conference. 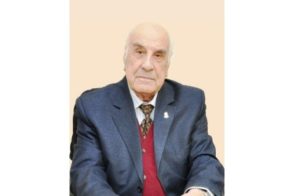 The editor-in-chief, the editorial board and the editors of journal
“CHEMICAL PROBLEMS” congratulate with the 90th anniversary, a member of the editorial board of this journal, a Correspondent member of NAS of Azerbaijan, Doctor of Chemistry, Professor, laureate of the State Prize, Honored Worker of Science – Ali Najafgulu oglu Nuriyev, wishes him good health and success in scientific activities.

The journal “CHEMICAL PROBLEMS” was awarded the “Web of Science Azerbaijan-2018” from the Clarivate Analytics. 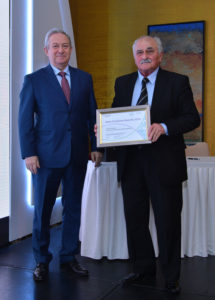 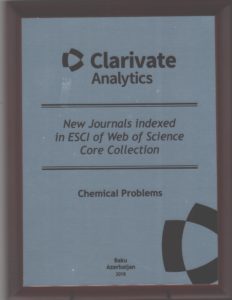 October 18-19, 2018, in the city of Makhachkala (RF), an international scientific-practical conference and a school of young scientists will be held “CHEMISTRY, CHEMICAL TECHNOLOGIES AND ECOLOGY: SCIENCE, PRODUCTION, EDUCATION”. Informational support belongs to the journal “CHEMICAL PROBLEMS”.